2017 is the 150th anniversary of Canada’s Confederation! This edition features information on this milestone celebration as well as on the regular topics of interest to alumni.

Spotlight on a Haitian alumni association

Alumni often establish official networks in their home country to share experiences and their knowledge with each other and with their home community. This edition highlights the Haitian alumni association, or the Association Haïtienne des Anciens Boursiers du Canada (AHABCA).

The AHABCA was established in January 2016 in Port-au-Prince, Haiti, and is managed by an executive committee comprised of a number of recipients of the Emerging Leaders in the Americas Program and of the Canada-CARICOM Leadership Scholarships Program.

The Association aims to strengthen solidarity and partnership ties between Canada and Haiti. At this time, it includes 50 active members and approximately 20 associates. To become an active member, one must be Haitian and have undertaken studies in Canada, either as a scholarship recipient of the Government of Canada or of another organization or as a self-funded student. Members are required to actively engage in the various initiatives of the Association.

Members are invited to participate in a number of activities, including workshops, conferences, seminars and information sharing sessions in Haiti. Some of the Association’s members also attend scientific conferences at the national and international levels. Furthermore, the Association works in partnership with local and Canadian stakeholders to highlight local knowledge and expertise, and to offer networking opportunities. Finally, the Association works with local media and youth clubs to communicate information on scholarship opportunities in Canada. It also shares information on Canada’s democratic values with youth.

If you would like to receive further information on the Association or if you are eligible to become a member, please consult the Facebook page of the Association Haïtienne des Anciens Boursiers du Canada.

If you are not from Haiti, please tell us about any similar alumni initiatives in your region! 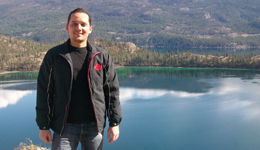 Q. What type of research are you currently undertaking as an academic?

A. I am currently developing my research in the area of Conservation Genomics applied to the genus Crocodylus in Cuba. The genus Crocodylus comprises a group of reptiles commonly known as crocodiles and two out of twelve species currently recognized in this group are found in Cuba. In general, Conservation Genomics is the application of genomic data and its analysis to the conservation of biodiversity. As researchers in this area, we employ a broad set of molecular techniques to study different aspects of the species’ genome (genomics) and use this information for the preservation of a species. I have been focusing in generating genomic data that can be useful in the establishment of conservation and management plans for critically endangered species and particularly the species of the genus Crocodylus that inhabit Cuba.

Q. How did your experience in Canada as a scholarship recipient contribute to your academic path or academic goals?

A. My experience in Canada was essential in achieving my academic goals. It positively complemented my education and specialization in the field of Conservation Genetics. I received specialized training in Conservation Genetics tools. I had the unique opportunity to interact with excellent professors in Canada, and to learn from them. In that respect, it gave me the great opportunity to undertake PhD studies under the supervision of a leading professor from the University of British Columbia, Okanagan Campus (UBC Okanagan).

Q. Did your scholarship in Canada lead you to pursue further studies, either in your home country, in Canada or in another country?

A. After my participation in the Emerging Leaders in the Americas Program (ELAP), I felt confident making international connections. The research that I undertook in Canada was a stepping stone to collaborations with prestigious international institutions. To give two examples, I was a visiting researcher at the Laboratory of Biodiversity and Climate Research at Goethe University, in Frankfurt, Germany in 2014-2015, and more recently at the Sackler Institute for Comparative Genomics at the American Museum of Natural History, in New York, in the United States of America, in 2016. In Germany, I was awarded a scholarship by the German Academic Exchange Service (DAAD) and in the United States, I received a Collection Study Grant from the American Museum of Natural History.

Q. Are you currently working on any joint research projects with Canadian academics?

A. Yes, I am currently developing joint research projects with the Ecological and Conservation Genomics Lab at UBC Okanagan, on Conservation Genomics of Cuban crocodiles. We are also developing a collaboration network between UBC Okanagan, McGill University and the Universidad de La Habana. Crocodylians are considered the world’s largest and most prominent living reptiles. The order Crocodylia is currently represented by 27 recognized or proposed living species, distributed among three families and nine genera. Our projects are focused on studying how the Cuban crocodiles have evolved and the magnitude of the hybridization between them. As the species interbreed, the impact of this process on the genetic identity of Cuban crocodiles is not known. The generated information allows us to answer questions such as: Are they real species if they hybridize? Which are their closest relatives?

Q. What types of collaborations do you plan to pursue with Canadian academics in the near future?

A. Having established strong ties with both UBC Okanagan and McGill University through ELAP, I look forward to continuing our collaborations. In the near future, I would like to conduct postdoctoral research in one of these universities or in another Canadian university.

Check out these academic/industry events taking place in Canada in the spring/summer of 2017.

The newly announced program will provide research funding to approximately 25 top-tier international researchers and scholars, including Canadian expatriates, over eight years. Research can be undertaken in Canadian institutions in the sciences, technology, health, engineering and the social sciences and humanities.

For future information on the implementation of the Canada 150 Research Chairs program, please monitor the following websites:

The Government of Canada Scholars’ Alumni Association (GCSAA) would be pleased to hear from you and share your success stories with others in our newsletter. Do not hesitate to contact us for any questions or comments.